The Clean Tech Car Revolution You Didn't Realise Was Happening

“The TaaS disruption will have enormous implications across the transportation and oil industries, decimating entire portions of their value chains, causing oil demand and prices to plummet, and destroying trillions of dollars in investor value.”

The value of oil could collapse within the next decade as technology disrupts the transportation market.

That’s the warning from the new RethinkX report, co-authored by Tony Seba, a Silicon Valley entrepreneur and Stanford University lecturer.

Seba criticises mainstream oil industry forecasts for ignoring how rapid adoption of electric vehicles through transport-as-a-service (TaaS) technology will decimate demand not only for oil-dependent combustion engines, but for car ownership itself.

When the electric TaaS revolution comes, it’s not going to be pretty for the oil industry

What the market is missing

According to Seba, the oil industry is vulnerable to a triple whammy threat from electric cars, autonomous driving software and the popularity of TaaS companies like Uber and Lyft.

Here’s how these three factors could combine to make owning a polluting car an uneconomic choice as soon as 2021.

Pretty soon, a fleet of autonomous, on-call vehicles will be cheaper and more convenient than having your own car.

Think about it. If you own a car, it’s mostly parked in your garage, sitting in the driveway or wracking up parking fees (or fines).

Once you tally up the purchase price, insurance, taxes, rego, maintenance, fuel, finance and depreciation, a privately owned car is a very expensive and under-utilised item.

Far from being science fiction, the reality of autonomous vehicles is closer than many people realise.

Tesla is already trialing self-driving cars on the roads of California, and Australia is getting in on the action with local trials of a Tesla-Bosch hybrid.

While there are policy hurdles to overcome before mass adoption, autonomous driving is in the long-term public interest. This will encourage regulators to adopt AV-friendly policies.

Electric cars are the ideal choice for a large fleet of autonomous vehicle. In as few as four years, autonomous internal combustion engine (A-ICE) could be too costly for ride-hailing TaaS fleets. That’s because autonomous electric vehicles (A-EV) will be cheaper to charge, have lower maintenance costs, slower depreciation and better software integration. 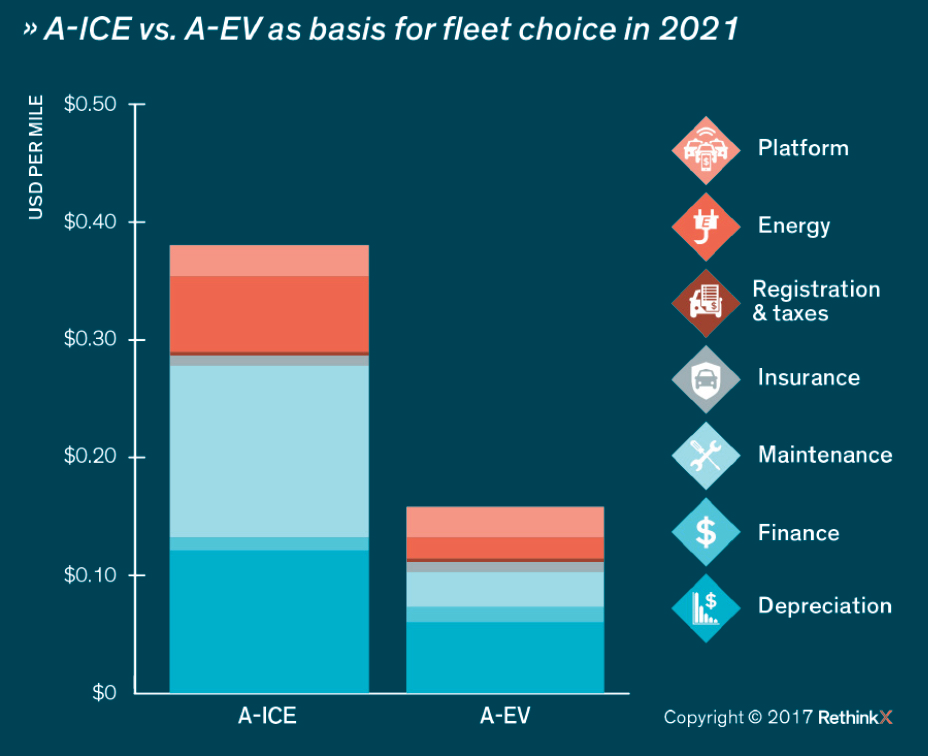 Even if oil-hungry cars use autonomous driving software, they won’t be able to compete with electric vehicles.

“By 2030, within 10 years of regulatory approval of autonomous vehicles (AVs), 95% of U.S. passenger miles traveled will be served by on-demand autonomous electric vehicles owned by fleets, not individuals.” 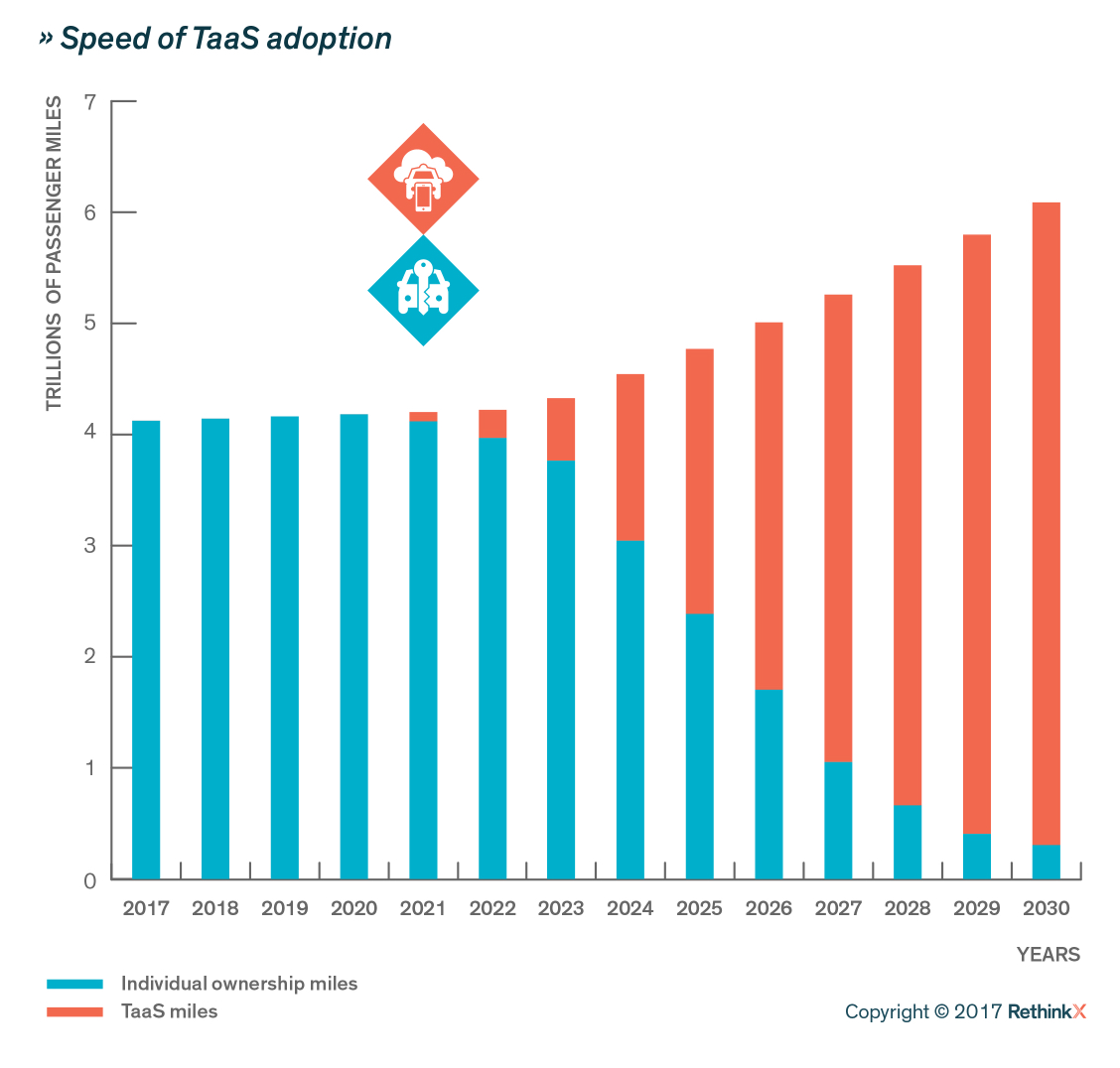 The result of this rapid, fleet-owned EV uptake?

“The TaaS disruption will have enormous implications across the transportation and oil industries, decimating entire portions of their value chains, causing oil demand and prices to plummet, and destroying trillions of dollars in investor value,” says Seba.

Seba’s report argues that TaaS presents an existential threat to the oil industry, and that stockholders have not yet realised the individual ownership model for cars is on the way out.

“We find that the implications of the TaaS disruption on the oil industry have not been fully recognized by the market. Current valuations of listed oil companies imply that stockholders are still basing their spreadsheet scenarios on the continuation of the individual ownership model, forecasting growth in revenues and cash flow for decades to come.”

Under Seba’s models, US oil demand from passenger road transport could drop by an incredible 90% by 2030. 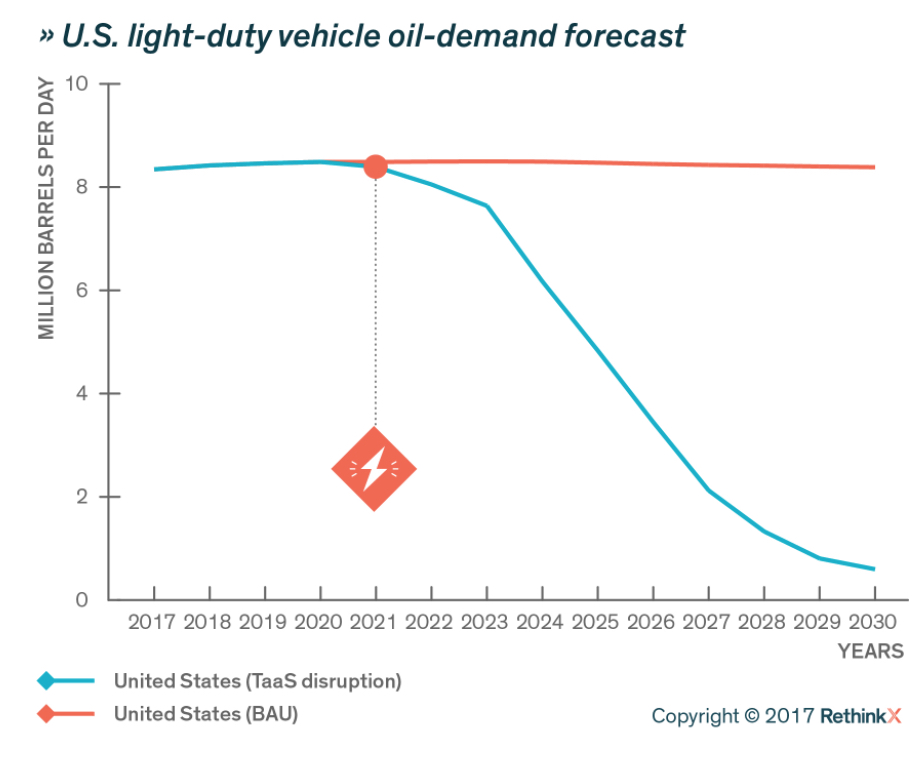 “The effects of such a dramatic decrease [in demand for oil] will ripple through the whole value chain, causing systemic disruption from oil fields to pipelines to refineries.”

However, Seba is adamant that the changes will create trillions of dollars in new business opportunities, consumer surplus and GDP growth.

With TaaS, an average family could save more than $5,600 USD a year in transportation costs. That’s the equivalent of a 10% wage increase.

These savings could lead to a massive cash injection in other areas of the economy, potentially resulting in “the largest infusion of consumer spending in history”.

In addition to putting money back in your pocket, TaaS will get gas guzzling personal vehicles off the road. In Australia, personal vehicles account for over half of the total emissions from transportation. In the US, the contribution of personal vehicles to total national emissions is 20%. If TaaS really does get the uptake Seba’s report predicts, it will go a long way towards solving the transport pollution problem.

All this environmental and economic benefit will come at a cost. The biggest losers are likely to be the oil industry and those still investing in it.